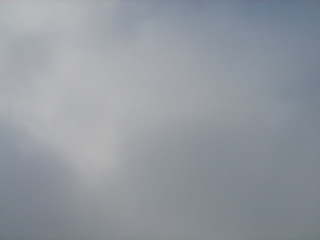 Grey skies in Aldeburgh, no wind, no movement, nothing. Seeing but not feeling grey, I go in search of other colours and call a friend to check the world hasn't ended. "I want to cut the sky with a knife and make it bleed" I say. "That's poetry" she says.

In the spirit of Rauschenberg's 'White Paintings', perhaps I just need to open my eyes, to look a little more closely at this grey canvas, and it will reveal glorious, infinite variations to me.

I imagine myself after a very serious but non-fatal car accident and feel much better. This may inspire an uplifting new section on my website.
Posted by Rhett Griffiths at 00:42 No comments: 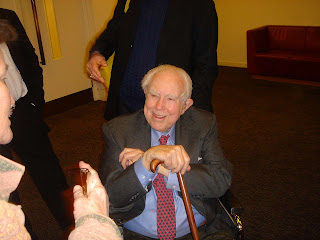 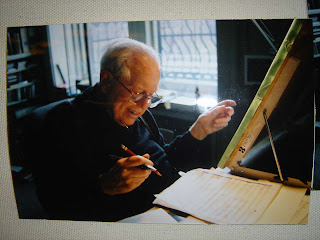 
I for one would have happily turned up simply to applaud any 97 year old who could make it onto the Barbican stage. Elliott Carter the composer who freed music from bars, was however so much more than just a very old man, full of life, insight, humour and mischief.

In a film about his life, Carter mentions liking Proust. At lunch at St.John, I order 6 madelaines, and offer one (still warm) to EC, which he accepts with openness and curiosity.
In the same film, John Cage playfully comments that 'Any idea is better out of the head than in the head'. Ouch that resonates, he's spot on! I must start realising the ideas swarming around in my head or I'll explode!

Carter says that he always wants to do something he has never done before with each piece of work. He loves the excitement of trying something new, where he doesn't know how it might turn out, fearless old bugger!

Apparently, on trying to put him up in a 5 star hotel right next to the Barbican, Carter objected, saying he'd just read about the hippest place in London, a new hotel called 'The Trafalgar' and that he wanted to try it. So he did! What appetite!
Posted by Rhett Griffiths at 11:03 No comments: